In 2018, a number of unprecedented natural disasters have occurred over the world, resulting the loss of thousands lives and costing about $155 Billion. Here are 10 of the deadliest and most destructive disasters on the Earth’s surface in the year.

From November 8 through 25 November 2018, a round of large, destructive wildfires were caused and erupted with strong winds in California. The three major wildfires included the Camp fire in Paradise; the Hill fire in the Santa Rosa Valley, and the Woolsey Fire in Los Angeles and Ventura counties. In total, 91 people were killed, over 18,000 structures and 230,000 acres were scorched.

The Camp fire, the worst of the three, caused 88 civilian fatalities, injured 12 civilians and 5 firefighters. It scorched an area of over 153,000 acres, destroyed 18,800 structures, and forced more than 27,000 residents to evacuate their homes, making it the deadliest and most destructive fire in California history.

Since 23 July 2018, a series of wildfires were caused in Greece during the 2018 European heat wave. The wildfires began in the coastal areas of Attica, and were the second deadliest wildfire event in the 21st century, after the 2009 bushfires in Australia. It was reported that 100 people were confirmed dead, 164 adults and 23 children were injured, over 700 residents were evacuated or rescued, and more than 4,000 residents were affected by the wildfires.

Since July 2018, heavy rainfall continued in Nigeria and reached its peak in late September, resulting in severe and extensive flooding and widespread destruction in 34 out of 36 states in the country. It was reported that more than around 82,000 houses were damaged or destroyed, at least 210,000 people were displaced, and 1.9 million people were affected. A total of 108 people were killed and 192 were injured by the floods.

On 26 February 2018, a 7.5 magnitude earthquake struck the Hela Province, Papua New Guinea. According to the records of U.S. Geological Survey (USGS), there were more than 270 aftershocks in total, with 68 above magnitude 5, and 6 above magnitude 6. It was reported that a total of 160 people were killed and many others were injured by the main shock and aftershocks, at least 7,000 houses were destroyed or damaged, more than 26,000 people were displaced, and over 544,000 people were affected by the quakes. 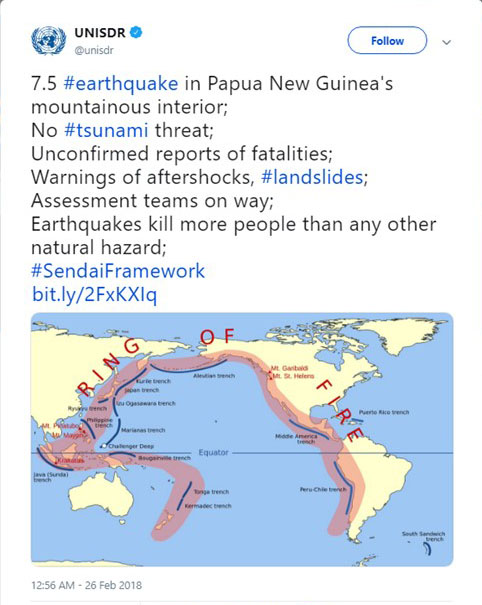 On 3 June 2018, a series of volcanic explosions and pyroclastic flows occurred at the Volcán de Fuego (Spanish for Volcano of Fire) located 44 kilometres or 27 miles from Guatemala City. It was the deadliest volcanic eruption in Guatemala since 1929. It was reported that at least 190 people were killed, 57 injured, and 256 missing.

From 28 June through mid-July 2018, successive heavy downpours in southwestern Japan, coupled with Typhoon Prapiroon on 3 July, resulted in widespread, devastating floods and mudflows in northern Kyushu. It is the deadliest freshwater flood-related disaster in the country since 1982. It was reported that 225 people were confirmed dead and 13 people were missing across 15 prefectures. More than 2 million people had to abandon their homes and retreat to safety.

On 22 December 2018, a violent tsunami triggered by a major volcano eruption at the Anak Krakatau Island in the Sunda Strait struck coastal regions of Java and Sumatra, Indonesia. It was reported that 426 people were killed, 7,200 were injured, and an estimate of 22,000 people were displaced. After the volcano eruption, the Anak KraKatau Island was partially collapsed by two-thirds, with the height reduced from 338 meters to 110 meters above sea level.

Following high rain since late July 2018 and unusually heavy rainfall during the monsoon season, severe floods affected the south Indian state of Kerala from 9 August 2018. It was the worst flood in Kerala in nearly 100 years. According to media reports, one-sixth of the total population of Kerala had been directly affected by the floods and subsequently associated incidents. More than one million people were evacuated, over 483 people died, and 14 were missing.

On 5 August 2018, a 6.9 magnitude earthquake struck the Lombok Island, Indonesia, which was followed by another 6.9 earthquake on 19 August 2018. It was announced that a total of 563 people were killed in the aftermath of the sequence of earthquakes, while more than 1,000 were injured. Around 42,240 houses and 460 schools were damaged or destroyed. More than 417,000 people were displaced.