2019 is one of the years with many alarming wildfires burning over the world. It is reported that the “most alarming” wildfire in the year is in the Amazon rainforest, causing unprecedented damage. What may be ignored is that massive wildfires flamed in the areas within or surrounding the Arctic Circle in 2019 are also alarming and destroying.

On the last Wednesday (25 September), a Special Report on the Ocean and Cryosphere in a Changing Climate was released by IPCC, painting a catastrophic picture of melting ice in the cryosphere and what it means for humanity and our Earth. The massive wildfires may play an important role in melting ice in the Arctic zone.

Wildfires in the Arctic zone are common in recent years. In 2019, the Arctic is suffering its worst wildfire season on record. The World Meteorological Organization (WMO) has called the 2019 Arctic wildfires “unprecedented”.  Scientists estimated that more than 100 intense and long-lived wildfires in the Arctic in this year emitted 50 megatons of CO2 in June and 79 megatons of CO2 in July – more than the total released in the area in the same season between 2010 and 2018.

In 2019, Greenland experienced an unprecedented amount and intensity of wildfires, more than in past decade combined. The largest wildfire, first detected on 10 July, took place between Sisimiut and Kangerlussuaq, Greenland. The fire persisted to August 2019. Overall, 93,000 acres (375 square kilometres) of woodland or grassland were destroyed [1].

Bloomberg reported that smoke from the wildfires had been billowing across the Greenland ice sheet, further driving up the already massive ice melt Greenland was experiencing amid record heat [2]. According to the National Snow & Ice Data Center (NSIDC), “an extensive area” equivalent to about 80 billion tons of the Greenland Ice Sheet disappeared over a 10-day period in July. In total, Greenland has lost over 250 billion tons of ice in this summer [3].

This year, the massive wildfires in Siberia began in June in poorly accessible northern areas. As most of the affected area is not inhabited, most of the fires are not being attended by firefighters, allowing the fires freely burning and extending for a long time. According to NASA data, the smoke from burning Siberian forests reached the territories of Alaska and Canada.

According to the Russian Aerial Forest Protection Service, quoted by RFERL, more than 5.5 million hectares (13.5 million acres; 50,000 km2) of forests in Russia, mostly in Siberia, have burned in this summer, putting Russia on track for its worst year on record for wildfires [4]. There have been no reported deaths or injuries due to the fires.

It is said that wildfires are a normal part of life in Alaskan forests. In 2019, Alaska experienced an “extreme” fire season started from 30 April. According to Alaska Interagency Coordination Center, about 236 of the 663 fires that started this year were still burning in the state by 31 August 2019; over 2.5 million acres (1 million hectares) of forest was burned, TIME reported [5].

Although lightning sparks 361 of the total of 663 fires in Alaska this year, record-breaking temperatures and dried-out vegetation has also played an important role. Since May 2019, Alaska experienced “extreme” drought conditions, the US Drought Monitor reported. Record-breaking temperatures were also noted in some areas in Alaska in earlier July 2019.

Canada is a country northward into the Arctic Ocean. Most of its land area is dominated by forest and tundra. Many communities are nested into forests with buildings and plants intertwined, so local communities are under an increased risk of wildfires. According to Canadian Interagency Forest Fire Centre, Canada has so far registered 3,873 wildfires in the fire season of this year. In total, these wildfires have burned more than 1.8 million hectares of forests, reported CTV News [6].

The largest wildfire in this year is the Chuckegg Creek blaze in northern Alberta, which burned more than 570,000 acres (2,300 km2) of forests and led to about 10,000 people being evacuated. No fatalities were reported. Warming temperatures and increased drought are believed to be the biggest reason of the wildfires. 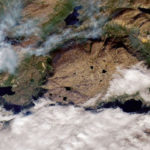