This means that air pollution was responsible for more deaths than many well-known risk factors such as malnutrition, alcohol use, road traffic injuries, malaria, and physical inactivity in 2017.

The SoGA2019 reported that long-term exposure to outdoor and indoor air pollution contributed to nearly 5 million deaths in 2017. This figure was huge, but was still subject to underestimation.

Several months ago, WHO released a report indicating that a total of 7 million deaths in 2016 was attributable to the joint effects of ambient and household air pollution, possibly due to that a different dataset and statistical models were used.

The analysis found that China and India together were responsible for over half of the total global deaths attributable to air pollution, with each of the two countries facing over 1.2 million premature deaths from all air pollution in 2017.

According to the SoGA 2019, exposure to air pollution could reduce life expectancy by an average of 20 months globally in 2017 — a loss that ranked below that related to dietary risks, all cancer and smoking, but above that related to unsafe drinking water, unsafe sexual behaviors and other risk factors.

In South Asia including India, Bangladesh, Nepal and Pakistan, where air pollution exposures are often the highest, loss of life expectancy rose to over an average of 30 months in 2017, said the SoGA2019. The Washington Post once stated that on average people in India have their life expectancy reduced by 5.3 years thanks to air pollution.

Worldwide, air pollution may continue to be one of the high risks contributing to death and disability. Even with improvements in air quality, as documented in the SoGA2019, the burden of disease attributable to air pollution will continue to rise as populations grow, age, and become more susceptible to the attributable diseases. 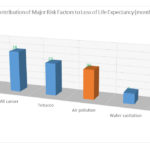