Earth.com is a private website incorporated in 2016 in Nevada, USA. It aims to deliver unique news and information about “everything we need to know about this amazing planet we call Earth”, with focuses on nature, science, and the environment. The website is also “an area devoted specifically to following the plight of species with Endangered status and providing the latest conservation news, photos, and facts”. Its slogan is “Nature · Science · Life.”

This website was launched in late 2018 and incorporated in May 2019 as an environment-focused non-profit, non-partisan Think Tank headquartered in Hong Kong. Its objectives are “to make the true impacts of human activity better understood by bringing the latest environmental news and data to the world, and to advocate for sustainable economic policies and global governance of natural capital.” The slogan of this website is “Past · Present · Future.” 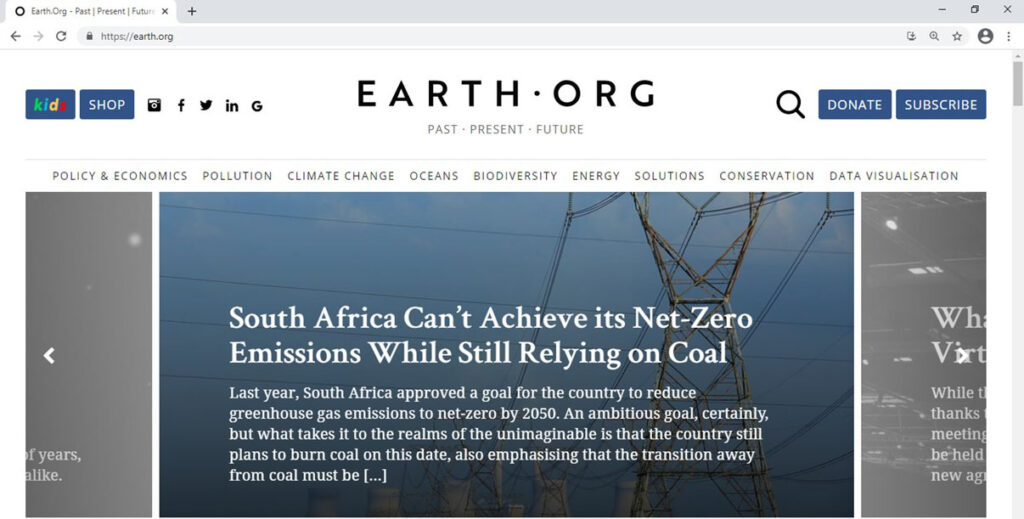 Save the Earth Foundation

The Save the Earth Foundation is a non-profit corporation established in California in 1972. It aims to raise the public awareness of environmental issues by funding research and education programs. In 1989, its first environmental grant co-sponsored a series of three workshops on global climate change. Since then, the Save the Earth Foundation has granted research funding to numerous colleges and universities.

The Future Earth is a 10-year international research program launched in June 2012 at the UN Conference on Sustainable Development. It is an interdisciplinary research program bringing together natural and social sciences, as well as the humanities, engineering, and law, with five offices in Canada, Sweden, USA, Japan, and France. The program aims to build knowledge about the environmental and human aspects of global change, and to find solutions for sustainable development.

The Care Earth Trust is an Indian non-profit organization launched in 2003, with headquarter in Chennai, Tamil Nadu. Its mission is “to provide scientific services in the area of biodiversity by assessing the human impact on the environment as well as strategising methods to improve it”.

Academic Earth is a private website founded in 2008 and headquartered in Houston, USA. Its mission is to give everyone on earth access to a world-class education. It is the first collection of free online courses and lectures from the world’s top universities.

The BASE-LiNE Earth is a project having started on January 1st, 2015, with financial support from the European Union’s Horizon 2020 research and innovation program. It is an international network of training, research and career development for highly motivated young scientists working in the fields of biology, chemical analytics, ecology, and geochemistry.

Berkeley Earth is an independent non-profit program founded in early 2010 (originally called the Berkeley Earth Surface Temperature project). The mission of Berkeley Earth is “to address the major concerns from outside the scientific community regarding global warming and the instrumental temperature record”.

Brilliant Earth is a private company founded in San Francisco, California in 2005. The company designs and sells engagement rings and other jewelry.

Red Earth is a Native-American cultural festival that takes places in June every year in Oklahoma City, United States. It was incorporated as Red Earth, Inc. in 1978 with the establishment of a museum – the Center of the American Indian – in the city.

Centre of the Earth

It is not the geographical core of earth. It is a purpose-built environmental education center located in Birmingham, England. The Center was opened in 1993. Since then, it is used as a base for a range of educational activities for teachers, students, children, youth, and play workers.

Cool the Earth is a non-profit educational organization founded in 2007. It is based in Northern California, United States. The mission of Cool the Earth is “to educate kids and their families about climate change and motivate them to take simple measurable actions at home to reduce their carbon emissions”.

Down to Earth is an Indian fortnightly magazine launched in 1992, with focuses on science and environment. The mission of the magazine is “to bring people news, perspectives and knowledge about environmental threats facing India and the world”, so as to prepare people “to manage environment, protect health and secure livelihoods”.

Earth Fare is an American health and wellness supermarket with 46 locations in nine states throughout the southeast and midwest United States. It was initially founded in 1975 as “Dinner for the Earth”, which was changed to “Earth Fare” in 1994.

It is not a house or an architecture. It is a non-profit organization and a model residential treatment center for those suffering from major mental disorders. It is located at East Millstone, a rural community near Princeton, New Jersey, USA.

The Earth Knowledge Corporation is a skillful environmental IT firm established in Arizona in 2003. It is committed to translate critical environmental and corporate data into a complete picture providing businesses and government agencies with decision tools that maximize profits, efficiency and resilience and minimize risks and costs.

The website earthtalk.org was launched in January 2015. It is an online Q&A column and a platform for the distribution of original content on related topics from a diverse array of contributors. Its mission is “to help people understand complex environmental issues, promote sustainability and live greener lives”.

It is an English-language publisher of books and journals on climate change, sustainable development, and environmental technology. It was founded in England by the International Institute for Environment and Development in the 1982. In 2010, Earthscan won three Independent Publishing Awards. In January 2011, Earthscan was bought by one of the “Big Four” academic publishers, Taylor & Francis.

The Earth Science Associates is not a non-profit organization. Instead, it is “a software development and consulting company to the oil and gas industry, government agencies and international organizations”. The company was founded in 1995. It is best known for the GOM3 geographic information system (GIS).

The Earth Rights Institute is a registered non-profit organization, founded in 2002, with offices in Pennsylvania and California. Its mission is to “take an innovative approach to join education, advocacy and research in building ecologically, economically and culturally sustainable communities in some of the world’s poorest regions”. Thus, the Institute has a strong focus on village development, land rights, and land policy.

It is a company founded in the San Fernando Valley of Los Angeles in 1995. The company is an online retailer and wholesaler of licensed collectibles, including action figures, clothing, statues, prop replicas, games, vinyl figures, dolls, and toys.

Fruit of The Earth

It is an out-of-state corporation filed as a Foreign For-Profit Corporation in the State of Texas in 1990.

Friends of the Earth International

The Friends of the Earth International was initially founded in 1969 as an anti-nuclear group. Nowadays, it is an international network of environmental organizations in 74 countries, with campaigns seeking to address the economic and development aspects of sustainability.

The Miss Earth Pageant is an international environmental event, launched in Philippines in 2001, aiming to channel the beauty pageant entertainment industry as an effective tool to promote environmental awareness. Along with Miss World, Miss Universe, and Miss International, this pageant is one of the Big Four international beauty pageants. Every year, 80 to 90 candidates from all over the world compete on beauty and knowledge of environmental issues. The winner will serve as the ambassador to environmental protection campaigns worldwide.

The OmniEarth is a software company in Arlington, Virginia, United States. It was found in 2014. The company provides global Earth observation and analytics to help subscribers assess, manage, and predict change.

Pure Earth is formerly known as the Blacksmith Institute – a New York City-based international non-profit organization founded in 1999. It works to identify, clean up, and solve toxic pollution problems, which have devastating health impacts, especially on children. In 2013, Blacksmith Institute changed its name to Pure Earth. Today, Pure Earth is the leading organization for the fight against global toxic pollution that affects human health with its various, unique, and innovative efforts.

The Earth Institute was established at Columbia University in 1995, with around twenty research units. It is the largest institute of this type in the world. It aims to address complex issues facing the planet and its inhabitants, with a focus on sustainable development. The Earth Institute actively supports pioneering and interdisciplinary projects in the biological, engineering, social and health sciences, especially those combining natural and social sciences.

The Windows on Earth is an online museum exhibit and exploration tool launched in 2008. It enables the public to explore an interactive, virtual view of Earth from space. The exploration tool has also been selected by NASA in 2012 to help astronauts identify targets for photography from the International Space Station.

The Earth Champions Foundation is a registered UK charity found in 2000. It aims to nurture and protect the environment through initiating change within local communities. As stated on its website, the Foundation implements its grass roots initiative every four years in a different city around the world and each programme lasts for one year. It has already undertaken Quests in Australia, Bristol Region, Hong Kong, and Switzerland.

In 2005, the United Nations Environment Programme also established Champions of the Earth as an annual awards programme to recognize outstanding leaders, from the public and private sectors worldwide, with significant contribution to environment protection. Each year, five to seven laureates are granted.

Apart from the organizations mentioned above, there are numerous research centers and academic institutes all around the world with a title or name including the word “earth” because of their focuses.  Millions of people in these organizations are working hard to make Earth a better place for human living.