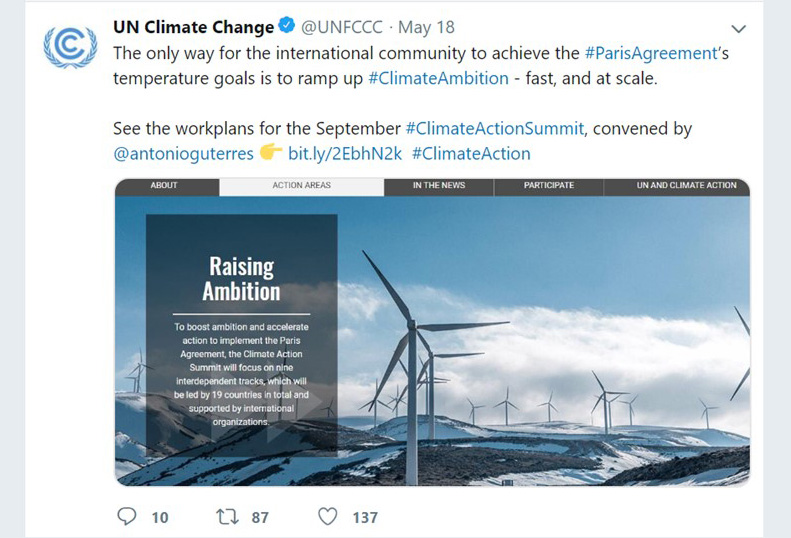 Negative impacts of climate warming are already being experienced globally. As set out by the IPCC’s Special Report on Global Warming, limiting global warming to 1.5°C above pre-industrial levels is necessary to prevent irreversible devastating changes. To achieve this goal will require reaching net zero CO2 emissions in most if not all countries by 2050.

Several days ago, the United Nations published a Joint Appeal to call upon Member States to take ambitious, urgent and concrete actions to limit global temperature rise to 1.5°C above pre-industrial levels. The Appeal was published on 10 May 2019, after a two-day meeting of the Chief Executives Board of the United Nations System, held in Geneva.

As stated in the Joint Appeal, the UN system is committed to “strengthening support by mobilizing scaled-up climate finance, facilitating technology transfer and capacity building to enable Member States to raise ambition in their nationally determined contributions to reduce greenhouse gas emissions by 45 per cent by 2030 and reaching the goal of zero net emissions in 2050”.

Several months earlier (Sep 27, 2018), a report entitled “Net-Zero by 2050: From Whether to How” was released by the European Climate Foundation. The report examines the mitigation options available and outlines possible EU pathways to reach net zero greenhouse gas (GHG) emissions.

According to the report, the next 10 years are crucial for avoiding the worst consequences of climate change on Earth. The report pointed out that simply ‘doing a bit more’ after 2030 will not work since not all pathways will remain open. Based on a simulation model of European emissions, the report concluded that “to be on a trajectory to net zero by 2050, GHG emissions will need to be reduced from about 55–65% by 2030 (compared to the peak levels in 1990)”.

In addition to USA, few Asia countries are present in this list. Given high levels of CO2 emissions in some Asia-Pacific countries, especially in China, USA, India, South Korea and Japan, mitigation actions in Asia-Pacific regions will be vital for limiting global temperature rise to 1.5°C (human-induced global warming has already reached approximately 1°C by 2018) above pre-industrial levels.

To achieve the goal set out by IPCC requires changes on an unprecedented scale at all levels. As stated in the report of European Climate Foundation, the move forward must be global and holistic – all nations and all sectors must play their part in reducing CO2 emissions.

European countries have pioneered declaration of their ambition for climate action, it is now the time for the nations in Asia-Pacific and other regions to follow. It is expected that more and more countries would declare their agenda for net zero CO2 emissions before the UN Climate Action Summit, which will be hosted by the UN Secretary-General on 23 September 2019, as called upon in the UN’s Joint Appeal.