Air pollution is a severe public health problem in China in recent years, especially in January and February because of cold weather. Favorably, air pollution across China seemed to have been substantially improved during the first two months of 2019.

This statement was made after checking the Real-Time Map of Air Pollution, hosted at the US-based nonprofit Berkeley Earth website, and comparing visually with the air pollution patterns during the same period in the last year.

As shown on the following figure, air pollution across China during the first two months of 2019 demonstrated three features, compared to comparable air pollution patterns in 2018.

First, PM2.5 concentration had been widely decreased across China during past two months, as demonstrated on the representative screenshots of the Map with the color changed from purple or scarlet in 2018 to light red or yellow in 2019. In some areas, air quality was even frequently at the good level, as marked on the map by the color changed to green.

Finally, extreme air pollution episodes with PM2.5 concentration at unmeasurable levels, as shown on the real-time map for 8th February 2018, did not occur during the first two months of 2019.

With the evidence on recent improvement of air pollution in China, it may be important to explore possible reasons or underlying mechanisms. Two factors might have contributed to the improvement:

First, it may be resulted from climate warming and reduced household consumption of energy for heating and warming. According to records, for an example, daily temperature in Beijing during the period from 21st to 29th January 2019 (maximum: 5°-12°) was much higher than that during the same period in 2018 (maximum: -1°- -5°), as shown on the following graph. 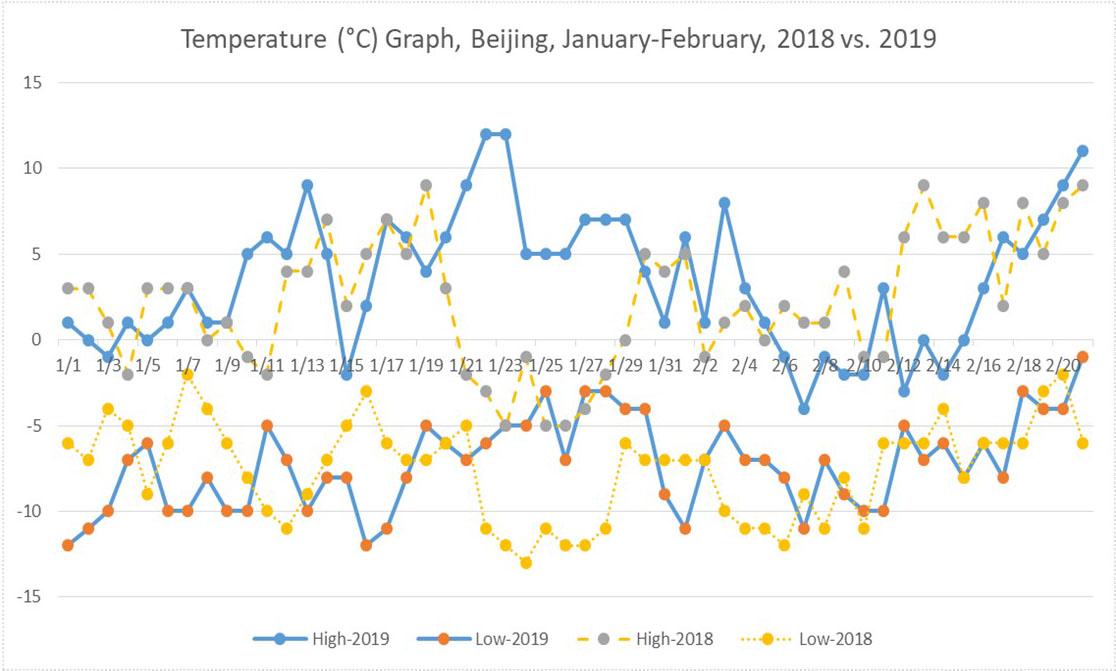 Another factor may be related to US-China trade war which has resulted in China’s economic downturn. Since summer 2018, numerous manufacturers or enterprises have been shifting their production lines from China to other Asian countries, where labor costs are more affordable, in order to avoid US tariffs. Consequently, millions of Chinese workers have lost their jobs. As reported in media, China’s economy grew at its slowest pace in almost three decades in 2018. Therefore, energy consumption for production might have been reduced, which might contribute to the improvement of air pollution across China during the first two months of 2019.

The effect of US-China trade war on air pollution across China may need to be further confirmed by quantitative evidence. A recent news reported by South China Morning Post suggest that the US-China trade war is having no effect on the Chinese steel and aluminum sector, one of major sources of air pollutant and CO2 emissions, which is being propped up by “surging domestic demand”. Since 2000, according to a report released by the Global Carbon Budget 2018, fossil CO2 emissions from China have increased from 3.35 to 9.84 billion tons (almost tripled). In 2017, fossil CO2 emissions from China covered 27% of global emissions (15% from US and 7% from India). Usually, high CO2 levels may indicate high levels of other harmful air pollutants. If fossil CO2 emissions could not be reduced substantially, air pollution in China would remain a major concern.