With a history of more than 2,000 years, fireworks and firecrackers are commonly used in China to celebrate festivals, weddings and other ceremonies. Hardly any kind of festive occasion goes by without flaming fireworks or exploding firecrackers. Since the millennium, fireworks have also gained skyrocketing popularity in Western countries for celebrating different festivals such as Halloween, Independence Day, and New Year’s Day.

Among all traditional Chinese festivals, the most massive and intensive use of fireworks and firecrackers occurs in celebration of Lunar New Year’s Eve. Chinese Lunar New Year is one of the world’s most prominent and celebrated festivals. The evening preceding the Lunar New Year’s Day is an important occasion for Chinese families to gather together for annual reunion. The central event of any Chinese New Year’s Eve is annual reunion dinner, which is comparable to Thanksgiving dinner and Christmas dinner in Western countries. Before the dinner, fireworks and firecrackers are lit to scare away evil spirits so as to bring good luck and happiness. They also signify a joyful time of the year.

The time with most intensive and massive fireworks may be exactly at or shortly after the arrival of New Year. The flaming of fireworks and burning of firecrackers are meant to say goodbye to the old and welcome the New Year. In such a situation, individuals in every family always get their best fireworks and firecrackers flamed or exploded.

Therefore, the amount of fireworks and firecrackers consumed on the last day of a lunar calendar year is huge at a national level. It has been well-known that fireworks can lead to substantial air pollution problems. Several reports have documented the impact of fireworks on air quality in such festivals as the Independence Day (the Fourth of July) in the United States, Diwali in India, Guy Fawkes Night or Bonfire Night in the United Kingdom. In this post, the impact of nationwide fireworks usage on air quality in China would be demonstrated using the Real-Time Map of Air Pollution.

In 2018, the Chinese Lunar New Year started on February 16 and the most important event of the celebration was the family reunion dinner on February 15 – Lunar New Year’s Eve. According to the Real-Time Map of Air Quality, air pollution is moderate across the country as usual in the daytime, but became heavy in some areas in the night in central and southern China (Figure 1). At UTC Time 19:00 pm (Beijing Time 3:00 am), shockingly severe levels of air pollution patterns were observed across the country as a result of intense fireworks display and firecrackers explosion. As shown on the Real-Time Map of Air Pollution with the black patterns (Figure 2), Air Quality Index became so high that was immeasurable in a large number of areas or places. Basically, many of the most-polluted sites coincided with the country’s most populous areas.

Notably, this happened under a condition that China has banned fireworks use in more than 400 cities since 2016 to curb air pollution and reduce injury accidents during the New Year’s holidays. Therefore, the air pollution was mainly complicated by fireworks smoke in suburban and rural areas. Otherwise, the levels of air pollution may be much more serious and frightening.

Such high density of fireworks smoke may leave dangerous toxins and harmful chemicals in the air for hours or longer. Although some argue that the levels of the fireworks smoke need to be sustained for much longer before widespread health problems emerge, the severe air pollution may have negative impact on health for children, older adults and those with heart disease, asthma and other lung diseases. Studies have indicated that firework smoke or haze is an undeniable source of various air pollutants (SO2, NO2, PM2.5, PM10 and chemical components) and is rich in tiny metal particles, including lead, mercury salts, copper, aluminum and barium, which give fireworks different colors. Extended exposure to these pollutants can lead to coughing, wheezing, shortness of breath, asthma attacks and even heart attacks.

Moreover, the firework residues falling to the ground often contain propellant chemicals and colorants, which eventually find their way into the soil and water systems. Some of the toxins may never fully decompose or disintegrate, but rather hang around in the environment and then are washed into lakes, rivers and other water sources when it rains, contaminating water with perchlorate. Consuming the water may result in thyroid problems.
The fireworks smoke persists only for a few hours. However, the impact of firework toxins and chemicals on soil and water may last for a long period of time. Generally, public attention has always been paid to air consequences of fireworks display and varied accidents (e.g., fire, injuries) caused by firecrackers explosion, the negative impacts on soil and water seem to be under-realized in China.

For air quality in other days during the 2018 Chinese New Year holidays, please read another post: 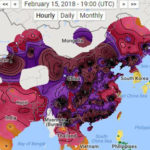 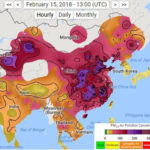 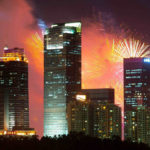