In recent years, air pollution has become a serious concern in Asia countries, especially in China and India. It is particularly horrendous in some areas such as northern China during the cold winter season because of a huge amount of needs for energy supply. People in Asia mainly rely on coal to keep heating and warming. Consequently, air pollutant emissions increase each day in a huge amount, resulting in heave smog or hazardous air pollution over a wide range of areas from time to time, especially when the wind doesn’t blow.

Air Quality Index (AQI) is an indicator that has been popularly used to access how polluted the air currently is. As shown on the Real-time Map of Air Pollution that is based on AQI and hosted at the non-profit Berkeley Earth website, air pollution is particularly serious in four areas in Asia: north-central China, northern India, central Asia including Kazakhstan and part of Xinjiang District, and the Middle East area surrounding the Persian Gulf. Very often, air pollution is at hazardous or deadliest levels in these areas and persistent for a period of a few days or weeks, while mild to moderate levels of air pollution are evident almost all year round there. Such a persistent exposure to hazardous air pollution is of particular risk for human health.

AQI, mainly measured by PM2.5, and the Real-time Map of Air Pollution are excellent in displaying the severity levels of air pollution in different areas. However, they are not sensitive in displaying the real scale or true range of air pollution at regional level since relevant data are not available for some areas. They are also not sensitive in estimating the total amount of air pollutants emitted or the total amount of carbon burned in different areas. Moreover, the density of PM2.5 highly depends on the nature, in addition to the amount, of fossil fuels burned.

Table. Fossil CO2 emissions in major nations or areas of Asia in 2017

As shown in the final column of the table, the top three nations or areas in the table with the largest amount of fossil CO2 emissions per square kilometer are Taiwan, South Korea and Japan (Singapore, Hong Kong and Qatar are not listed in the table for the limited amount of fossil CO2 emissions, though the amount of CO2 emissions per square kilometer is much higher there). However, air pollution as measured by PM2.5 in these areas is far less serious than that in northern China, possibly duo to that oil and gas rather than coal are a major source of energy in Taiwan, South Korea and Japan. Moreover, air pollutant emissions in these areas can be easily driven away by wind because all of them are island nations or areas. These reasons are also applicable to Malaysia where the amount of fossil CO2 emissions per square kilometer (772.0 tonnes) is slightly higher than that in India (750.3 tonnes) but air quality is always better.

In China, the average of fossil CO2 emissions per square kilometer is at a middle level, much lower than that in South Korea and Japan. However, dreadful air pollution is prevalent in China, especially in its northern areas surrounding Beijing, mainly due to that coal is a major source of energy there. If adjusted for barely populated regions and under-developed areas in China and taking seasonal variance into account, the amount of fossil CO2 emissions per square kilometer may be doubled or tripled in northern China in the winter season. In a very few nations such as Pakistan and Afghanistan (omitted in the table), both the amount of CO2 emissions per capita and the amount of CO2 emissions per square kilometer are quite low. However, it may not be possible for them to have good quality of air, as coal is also a major source of energy there. Most importantly, serious air pollution is almost always evident in its neighbor nations including China, India and Iran.

Asia is the largest and most populous continent on the Earth. Its 4.5 billion people constitute roughly 60% of the world’s population. It covers an area of about 44.6 million square kilometers, about 30% of Earth’s total land area and 8.7% of the Earth’s total surface area. Air pollution and fossil CO2 emissions in Asia are so significant that definitely have great impact on global air quality and climate change. Currently, few populated areas in Asia are covered with the air that meet the WHO’s standards for air quality. Most importantly, the huge amount of air pollutant emissions generated in Asia, especially in China, is expanding every day and spreading to other areas over the world. It wouldn’t take long, global air quality would become poorer and climate would become warmer, if fossil CO2 and air pollutant emissions in Asia cannot be effectively reduced. 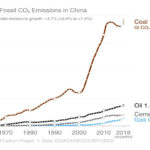 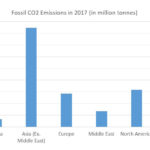 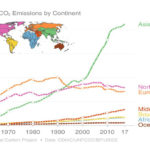 Wait this is wrong, please change.