In this post, I would briefly overview the air pollution in Europe over the past two weeks, from February 4, 2018 (Sunday) to February 17, 2018 (Saturday).

On February 4,2018, air quality was good in western Europe but poor in eastern Europe. Since February 5, 2018, harmful air pollution had spread to almost all areas in Europe and persisted for five days. As shown on the real-time Air Quality Map, the unhealthy air pollution pattern was persistently visible across nearly all countries in Europe from February 5 to February 9, 2018. Air quality in western Europe seemed to be improved for several days thereafter, but became poor once again on February 16 and 17, 2018. 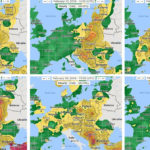 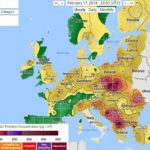