In recent years, air pollution has become a serious concern in Asia countries, as a result of rapid industrialization and urbanization. It is not only prevalent in China and India, but also evident in Korea, Mongolia, Kyrgyzstan, Pakistan, Iran, Turkey, United Arab Emirates, Thailand, Vietnam, Malaysia, and Indonesia, as shown on the Air Quality Map. Serious air pollution is no longer a local problem for one or two countries, but also a regional and trans-boundary issue imperatively requiring international cooperation.

Among these countries, China and India have world’s deadliest air pollution. The situation is particularly serious during the cold and bitter winter season, when the need for energy supply is huge. Most people rely on fossil fuels (coal, oil, natural gas) or biomass burning to keep warming. Consequently, emissions of air pollutants increase substantially, which result in heave smog over a wide range of areas from time to time. Very often, air quality is in very poor state or at danger (hazardous) level when wind doesn’t blow. Nowadays, heavy smog has become a common phenomenon in Northern China.

Air Quality Map displayed at the Berkeley Earth website indicates that the quality of air was persistently hazardous in Central-Northern China, Western China and Northern India over the past two months. Such a persistent exposure to hazardous air pollution is of particular risk for human health. Evidence suggests that air pollution has resulted in millions of deaths in China and India per year. Several studies have also documented the relationship between seasonal air pollution and mortality. However, to what extent the persistent exposure to hazardous air pollution is correlated to mortality remains unclear, which should be further investigated.

Although India and China both struggle with deadly pollution, only one fights it, a Forbes report pointed out recently. In China, the government has closed up many factories with high emissions of air pollutants. The Chinese government has also directed steel and cement manufacturing units to cut down the output of their products. Furthermore, China has taken high-polluting vehicles, those registered before the end of 2005, off the roads, and taken measures to restrict traffic flow during periods of heavy pollution. In order to reduce smog and air pollutants, China had also introduced a regulation restricting coal burning in major cities in northern China two months ago. However, the ensuing sequelae was that millions of people were frozen in the winter when coal could not be burned and the supply of natural gas was insufficient. Consequently, the “coal to gas” policy had to be suspended.

A recent report released by the GreenPeace East Asia suggested that average PM2.5 concentrations fell by 33% from 2013 to 2017 in 74 cities across China for which data is available. This figure seems to be inspiring but should be interpreted with caution. The same report indicated that the country as a whole saw a minimum yearly improvement during the past year, with PM2.5 levels falling by only 4.5%. Currently, China still burns half of the coal consumed in the world. As shown on the Air Quality Map, hazardous air pollution patterns were persistently visible across Central-Northern and Western China during the cold winter season. Further effective and acceptable measures are warranted in the future. Unlike in China, seasonal variation in climate is not so significant in India. However, serious air pollution pattern is also persistently visible in most areas across India during the past two months, especially in Northern India with a cold climate there. According to a recent report published on the Lancet, India toped the world in pollution-related deaths, and China was second on the list. Possibly, air pollution may be persistent in India during most of the time in a whole year, since rapid industrialization and population growth have adversely affected air quality there. Since 2010, India has experienced the steepest increases in air pollution, and has the highest PM2.5 concentrations in the world. A study conducted by WHO indicates that half of world’s 20 most polluted cities are in India, even though air pollution is more serious in many cities in Northern China during the cold winter season. Unfortunately, India has not yet come out with state efforts of a scale that can revolutionize pollution control, as pointed out by Forbes, although India’s Supreme Court has banned the sale of fireworks in an effort to preserve air quality. Without effective interventions, serious air pollution may do harms to India’s economy and development in the future.

Given the cold weather, it can be expected that serious or hazardous air pollution in China and India will lasts for several weeks more.

Apart from in China and India, serious air pollution is also persistently evident in major cities in Mongolia, Iran and Turkey during the cold winter season, as shown on the Air-Quality Map. Moreover, the extent of air pollution in central Asia countries seems to be under-assessed so far, due to lack of relevant data there. On the Air Quality Map, many areas have not been colored. This does not mean that air quality in all of these areas is acceptable. Further sensitive assessment measures or more data may be needed to assess the real-time range of serious air pollution, in addition to the concentration of air pollutants, in any area concerned.

Analysis of air quality trends in 2017 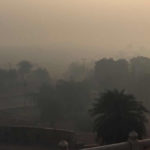 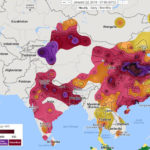