The Air-Quality Map provided by the US-based nonprofit Berkeley Earth presents us with a whole picture of air quality in European countries. On the map, persistent and unhealthy air pollution was evident across Eastern-European countries during the first month of 2018. The toxic air pollution was noted most often in Poland and Bulgaria, followed by Slovakia, Romania and Serbia. This is roughly consistent with the 2016 report of Air Quality in Europe, released by the EEA, which indicates that the European countries with the worst levels of PM2.5 are Bulgaria, Poland and the Czech Republic.

In Western Europe, moderate air pollution was evident in most countries from time to time, though not persistently, including Germany, Austria, Spain, United Kingdom and France. Generally, “those living in Eastern Europe and the Balkans are typically breathing more toxically polluted air than their neighbors in Western Europe”.

According to relevant reports, the disparities can be attributed to socioeconomic factors (less wealth, more consumption of coal and wood, and fewer air-pollution control policies in Eastern European and Balkan countries compared to the rest of Europe) and geographic variation (many cities are located inside bowl-shaped valleys in Eastern Europe). During the cold winter season, air quality is particularly bad in Eastern Europe, because coal and wood stoves are often used and coal-fired power plants are running at full strength in order to keep warming. In Western Europe, most countries have moved away from coal-fired power plants.

A recent news report on Quatz, citing a tweet by a fellow at the European Climate Foundation and the former environment minister of Bulgaria, stated that “there’s an iron curtain dividing Europe into safe and dangerous places to breathe”. It is a joke, but may not be right. Taking a dynamic look at the real-time air quality map over a one-month period, as shown above, the statement seems to be over-optimistic.

In my opinion, it is not an iron curtain but a gauze curtain or a fabric curtain, and the “curtain” is often torn into pieces by high-concentration of air pollutants. According to the dynamic air-quality map, it seems that air pollutants exported from Eastern-European countries have invaded into the air space of some countries in Western Europe from time to time. Of course, air pollutants generated in Western Europe, driven by the wind, may have floated into the air space of Eastern-Europe countries from time to time as well. Although coal-fired stoves and power plants are no longer used in Western Europe, emissions from traffic vehicles may be huge there, compared to those in Eastern Europe. Even if there is an iron curtain at any place, it may be uncovered or collapsed in modern globalizing world.

Most countries in Western Europe are taking substantial measures to mitigate air pollution. As documented in another media news, the European Union’s top environment official has warned that nine European countries could face legal action if they fail to make progress on reducing air pollution. Currently, it is still unclear about what measures are undertaking or have undertaken to control air pollution in Eastern Europe. Given that air pollution is not a local problem but a pan-Europe problem, effectively regional cooperation is indeed needed. 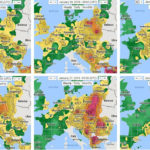