According to the data we calculated, based on a database released by the Global Carbon Budget 2018, Singapore toped world for fossil CO2 emissions per square kilometer in 2017.

The significant difference in fossil CO2 emissions between Singapore and Hong Kong may be due to that approximately 96% of energy and electricity in Singapore is generated directly or locally from fossil fuels (mainly natural gas), whereas Hong Kong imports much electricity from mainland China, which is mainly generated by nuclear-power station (even so, air quality in Hong Kong is still quite poor).

According to relevant records, Singapore was the top 12th country in fossil fuel imports in 2018. Natural gas, oil and waste account for 95%, 1% and 4% of power stations’ fuels, respectively. There is no any water or nuclear power station in Singapore. It is not only the top International-meetings city, second-most competitive country and 3rd-leading financial center, but also the 3rd largest oil-refining and trading center and world’s largest oil-rig producer.

Another factor contributing to extremely high fossil CO2 emissions per square kilometer in Singapore may be related to the climate. Singapore is an island city-country in Southeast Asia, lying only one degree (137 kilometers) north of the equator. It has a tropical rainforest climate with uniform temperature and pressure, high humidity and no distinctive seasons.

In Singapore, temperature does not vary much throughout the year, ranging between 25 and 35 °C (77 to 95 °F). Because of long-lasting high temperature, the need of energy for space cooling is huge. Local studies have indicated that more than 60% of electricity in both residential and non-residential buildings in Singapore is typically used for air-conditioning.

Given popular use of natural gas in Singapore, air pollution may not be a major concern there. However, such a large amount of fossil CO2 emissions per square kilometer is a major factor contributing to local climate warming and urban heat island. In addition, high level of CO2 emissions may impact human health by displacing oxygen in the atmosphere.

It seems that energy supply in Singapore depends almost merely on fossil fuels. In a long run, such an energy supply model may not be sustainable. It remains a great challenge for Singapore to look for renewable sources of energy. 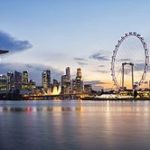 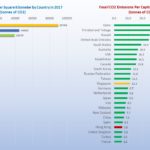