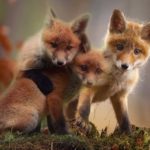 On October 30, 2018, the World Wide Fund for Nature (WWF) released its latest report on the current state and trends of global vertebrate biodiversity, entitled “Living Planet Report 2018”, declaring that global wildlife populations declined, on average, by 60% between 1970 and 2014.The Living Planet Report was published every two years. In 2016, WWF reported a 58% decline in … END_OF_DOCUMENT_TOKEN_TO_BE_REPLACED