On the Real-Time Map of Air Pollution, hosted at the US-based non-profit Berkeley Earth website, the countries surrounding the Persian Gulf – one of the most important areas in the Middle East and the world – are a region with most visually impressive air pollution patterns in the summer season, exceeding China and India.

Unlike in other areas or countries, the climate in the Middle East includes only two seasons: winter and summer. They are often referred to as hot and hotter seasons. The winter covers from October to April. The summer includes May, June, July, August and September. The hottest months are July and August.

As shown on the Map, air quality was quite poor in Iran, Kuwait, and United-Arab Emirates in August 2018. During the hotter season, Air-Quality Index was often higher than 200 and PM2.5 concentration higher than 100 μg/m3 in these areas. Sometimes, AQI was recoded to be higher than 400 and PM2.5 density higher than 300 μg/m3 in some areas.

The Persian Gulf is a mediterranean sea with an area of 251,000 km2. There are eight countries with a coastline on the Persian Gulf, including Iran, Iraq, Kuwait, Saudi Arabia, Qatar, Bahrain, the United Arab Emirates and Oman. The area is the world’s largest single source of crude oil and produce about 25% of the world’s oil. The major source of air pollution in the area comes from consumption of oil. Another major source is related to sand and dust storms, particularly in the regions close to deserts.

Broadly, the whole Middle East is a transcontinental region with an area of 7.2 million km2, more than two times of the area in India — the second largest country with poorly polluted air. There are a total of 371 million people living in 18 countries in the Middle East. According to the data of World Health Organization and International Energy Agency, five nations ranked in the list of 10 countries with the world’s dirties air are located in the Middle East, including Bahrain, Iran, Egypt, Qatar and United Arab Emirates, and five countries in the list of 10 nations with the highest carbon dioxide emissions are Middle East nations: Qatar, Kuwait, Bahrain, United Arab Emirates and Saudi Arabia. Most of these countries have a coastline on the Persian Gulf. In addition, another country, Turkey, is the 6th largest nation with toxic air pollution over the world.

On the Real-time Map of Air Pollution, the severity levels air pollution in some countries can be easily identified. However, the real scale or range of air pollution in the Middle East remains uncertain, since relevant data are unavailable or insufficient for some countries, such as Iraq, Oman, Yemen and Egypt.

According to media reports, various measures haven been taken in different nations of the Middle East to mitigate air pollution. These measures include introduction of hybrid and electrical cars, tightening the standards related to petrol quality, expanding the use of non-polluting renewable energies, tax exemptions on cleaner cars, greater levies on those with higher emissions, and cooperation with international organizations on capacity building in environmental governance. However, their effects seem to be limited so far. A recent report of the experts in the University of Surrey in England points out that private sector support is key to reducing emissions in the Middle East. Given the importance of oil production in economic growth and the nature of climate in the region, it remains a great challenge how to effectively mitigate air pollution in different nations in the Middle East, especially those with a coastline on the Persian Gulf. 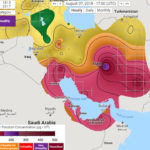