From January 28 to February 10, 2018, harmful air pollution was persistently evident in Asia, including China, India, Bangladesh, Turkey and Mongolia, according to the Air Quality Map based on available data.

On February 8, dreadful air pollution occurred in northern China. The black pattern on the Air Quality Map suggested that PM2.5 concentration in the area was higher than 999 ug/m3, becoming immeasurable. This situation continued on February 9, 2018. The heavy air pollutants were floated to the central China on February 10, 2018.

In the east-northern China, where heavy snow is common throughout the winter, the level of air pollution was relatively lower over the past two weeks, compared to other areas. The air pollution pattern with orange or yellow color, presented there, suggested that PM2.5 concentration was lower than 100 ug/m3.

In India, hazardous air pollution patterns were persistently visible in northern areas, including New Delhi, Lucknow and Kolkata. The heaviest air pollution was observed in New Delhi on January 28, 2018. PM2.5 concentration in New Delhi was still higher than 480 ug/m3 on February 9, 2018.

Harmful air pollution patterns were also persistently visible at Ulaanbaatar, the capital of Mongolia, until to February 8 when air pollution became clearer there. Data on air pollution in a wide range of rural Mongolia are not available.

Air quality in Malaysia, Indonesia and Philippines seems to be good in earlier days, but became poor since February 8, 2018.

Regarding air pollution in other countries, data are not available. It is thus infeasible to assess the severity level of air pollution in these countries over the period. However, relevant reports have suggested that Pakistan, Afghanistan, Iran and United Arab Emirates are among 10 countries with the world’s dirtiest air, and that Turkmenistan, Tajikistan, Uzbekistan, Kazakhstan, Iraq and Saudi Arabia are on the list of 10 nations with the most deaths from air pollution. 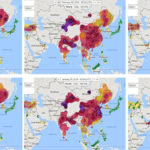 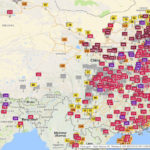 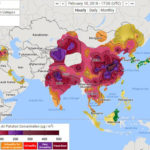 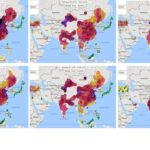