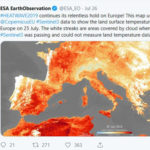 Since late June 2019, Europe are experiencing extreme heat. Spain, France and Italy have suffered through several intense heatwaves, with temperatures exceeding 40.0°C in many areas. The highest ever temperature was recorded in France at 46.0°C.The heatwaves in Spain have also trigged the biggest wildfires in 20 years. Other countries such as Germany, Poland and the Czech … END_OF_DOCUMENT_TOKEN_TO_BE_REPLACED

On the Real-Time Map of Air Pollution, hosted at the US-based non-profit Berkeley Earth website, the countries surrounding the Persian Gulf – one of the most important areas in the Middle East and the world - are a region with most visually impressive air pollution patterns in the summer season, exceeding China and India.Unlike in other areas or countries, the climate in the … END_OF_DOCUMENT_TOKEN_TO_BE_REPLACED 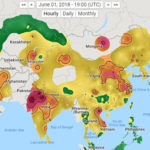 Air pollution is a major public health problem in Asia, especially in China and India. It has been widely known that air pollution is deadly worse in winter there because of all the fossil fuels and biomass burning used to keep warming.In contrast, few complaints have been made for air pollution problem in summer. This does not mean that air quality over the continent of Asia … END_OF_DOCUMENT_TOKEN_TO_BE_REPLACED