According to a recent study of Global Burden of Disease (GBD), published in the journal Lancet Planetary Health, some 1.7 million Indians died due to air pollution in 2019, which was 18% of the total deaths in the country; from 1990 to 2019, the death rate from outdoor ambient air pollution has increased by 115% in India.

According to State of Global Air 2020 Report, total number of deaths attributable to PM2.5 were 1.42 million in China and 0.98 million in India in 2019. These figures should be interpreted and generalized with extreme caution, since the death numbers attributable to household air pollution and ozone pollution were not included.

The State of Global Air 2020 Report also revealed that age-standardized rates of deaths attributable to PM2.5 were 96 deaths/100,000 population in India and 81 deaths/100,000 in China in 2019. Based on these rates, the total number of deaths related to air pollution in India in 2019 should be higher than in China, given the two countries share similar population size (1.439 billion in China vs 1.38 billion in India), 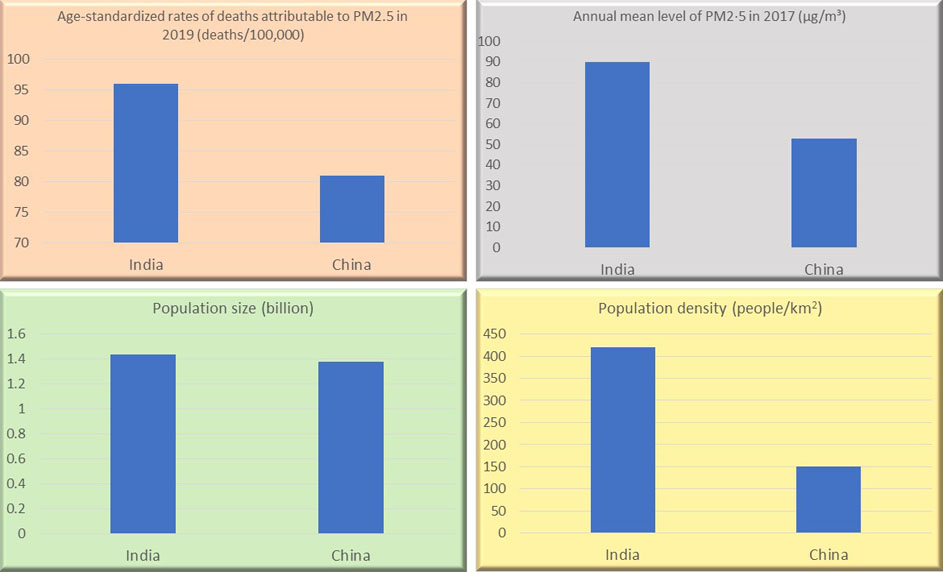 In 2017, annual population-weighted mean level of PM2·5 was 89.9 μg/m³ in India and 52.7 μg/m³ in China.  Since 2017, air pollution has been worsening in India due to economic development but improved in China due to economic downturn. Given the population density in India (419.8 people per square kilometer) is 2.8 times more than that in China (150.5 people per square kilometer), it is undoubtful that air pollution is killing more people in India than in China.

The recently released GBD study reported that the death rate attributable to household air pollution has decreased by 64% in India from 1990 to 2019. This figure should also be cautiously interpreted. It does not suggest that household air pollution in India has been improved but only suggest that the proportion of population living in households where cooking is done with solid fuels has decreased during 1990-2019.