In 2019, China’s GHG emissions reached 14.09 gigatons of CO2 equivalent (MMt CO2e), surpassing the total annual emissions of all developed countries combined (including all member states of the OECD and European Union) for the first time at 14,057 MMt CO2e, about 36 MMt CO2e short of China’s total, a US-based environment-focused think tank, the Rhodium Group, reported on May 6, 2021.

According to the Rhodium Group’s report, China’s share of the global GHG emissions total of 52 MMt CO2e in 2019 rose to 27%, far exceeding the second highest emitter – America, which contributed 11% of the global total in 2019 even though America is the largest single contributor of cumulative GHG emissions.

While the global data for 2020 is not available yet, it can be expected that China’s GHG emissions reached a new historical high in 2020, given that China’s net GHG emissions grew around 1.7% whereas emissions from almost all other countries declined sharply in the wake of the COVID-19 pandemic, according to the Rhodium Group report.

With the climate warming crisis driven by increasing GHG emissions, various countries are making commitments to reduce their emissions. On April 22, Earth Day 2021, Biden formally pledged, during the Virtual International Climate Summit, that America would cut its GHG emissions by 50-52% relative to 2005 levels by 2030, and that 100% of America’s energy would be carbon-free by 2035.

As the world’s largest ongoing emitter, China made no announcements during the climate summit, New York Times reported. China’s president Xi Jinping just said to strictly control its coal consumption between 2026 and 2030, but Xi’s announcement was short on specifics. China’s overall targets — hitting peak GHG emissions by 2030 and getting carbon neutrality by 2060 — remained unchanged. It is not impossible that China’s targets would defer achieving the United Nations’ sustainability goals.

China’s high GHG emissions may be partly attributed to its population size. On May 11, 2021, China announced that its overall population rose to 1.412 billion in 2020, according to its 7th national census. This means that China’s population is not only more than the estimated population in Africa (1.34 billion), in Americas (0.96 billion) or in Europe (0.75 billion), but also more than the total estimated population of all developed countries combined (1.345 billion including all members of the OECD and EU). However, China’s land area (9.6 million sq km) is only a quarter (26.3%) of total land area of all developed countries combined (36.4 million sq km, including all OECD and EU member states). 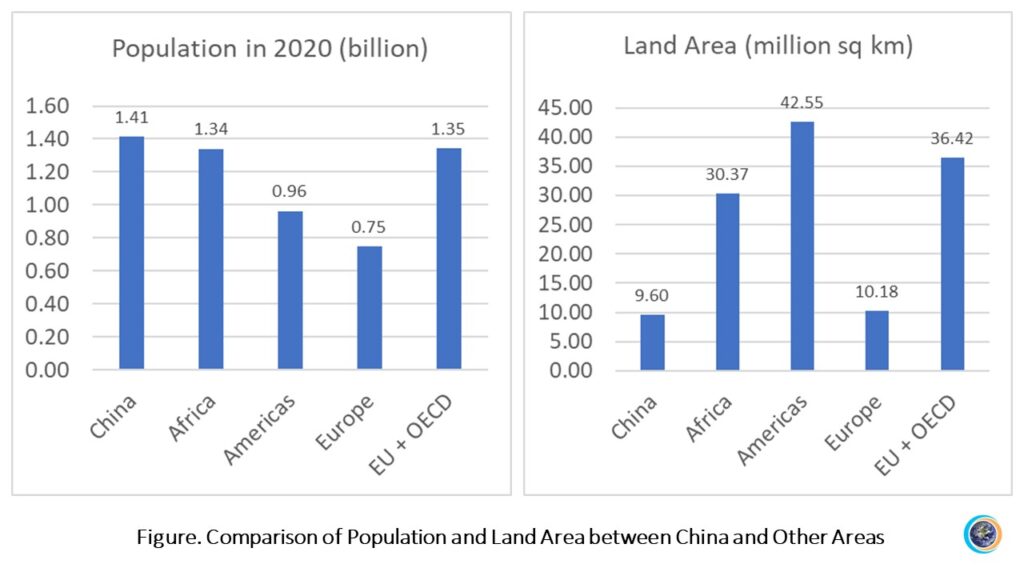 Although the China’s census data showed a fertility rate of 1.3 children per woman in 2020 – the slowest population growth in decades, it is undoubtful that the population growth in China will continue to in the next few years, given its population structure. According to the prediction of the United Nations, China’s population will peak in 2030 before declining. However, this prediction may be over-optimistic given the three-child policy announced by China this Monday (May 31, 2021). Overpopulation in China will have negative impacts on sustainable development.

In recent years, China’s state media has been increasingly arguing that the population may start to shrink in near future as population growth slips to slowest ever. China’s government worries that shrinking population may undermine economic growth due to the inverted age structure with more old people than the young. In 2016, China ended a controversial one-child policy and allowed couples to have two children. This Monday, China further announced to allow married couples to have three children.

So-called “demographic crisis” may be exaggerated in China. Economic growth can be maintained or enhanced through other ways rather than population increase. Generally, the two-child policy is an ideal model for sustainable development. Overpopulation not only results in different environmental problems (e.g., air pollution, water shortage, etc.) but also generates numerous GHG emissions resulting in global warming crisis. Given its large amount of annul GHG emissions, China’s new policy to encourage population growth may be in controversial as well.