With industrialization, urbanization and population growth, air pollution has become a global problem. Nowadays, air quality has become a major concern for many people. The real-time Air Quality Index (AQI) has been popularly used to access how polluted the air currently is. Since 2007, the World Air Quality Index project team has been proving a transparent air quality information every day for more than 70 countries. However, has it always uncovered the truth pertaining to the severity level of air pollution? I didn’t think so. From time to time, we may be tricked by the real-time Air Quality Index or real-time PM2.5 concentration.

In this post, I would address how we may be tricked by the real-time AQI first, followed by the limitations of the real-time AQI. At the end, an indicator for comparing the severity levels of air pollution across different countries and evaluating the effectiveness of anti-air pollution policies and interventions is recommended.

Let me show two pairs of examples first. The first came from Europe. As shown on the visual map of air pollution, moderate or unhealthy air pollution patterns were visible across most areas in Europe, including Lithuania, Poland, Czechia, Germany, Belgium, France, and the United Kingdom, on January 27, 2018. However, air quality in these countries became quite good three days later (January 30, 2018), whereas air quality in Southeast European countries such as Romania, Serbia, Bulgaria and Greece remained poor. Had air pollutant emissions been mitigated so quickly in the countries in Northern and Western Europe?

The second pair of examples came from China. As shown on the visual map of air pollution, harmful air pollution patterns with PM2.5 concentrations ranging between 150 and 250 ug/m3 were evident across China on February 5, 2018. Three days later (February 8, 2018), the most dreadful air pollution (black pattern) were observed in northern China, covering a land area of more than one million square kilometers, and lasted for three days. The concentrations of PM2.5 in the area were so high (>999 ug/m3) that were unmeasurable. Had the real-time AQI uncovered the truth pertaining to the severity levels of air pollution on February 5, 2018? Had the amount of air pollutant emissions increased so significantly in the area within such a short period of time?

The answers may not be confirmatory. For the European cases, it was obvious that the wind had driven air pollutants away from those countries. Air pollutant emissions may not be reduced. For the Chinese cases, the severity of air pollution seemed to be under-demonstrated with the PM2.5 concentrations on February 5. It seemed that the wind from the southeast (as suggested by relatively good quality air observed in Japan, Philippines and southern China) had taken some air pollutants away from China into the air space over Mongolia (as suggested by relatively poor air quality observed in northern China and the capital of Mongolia). Three days later, the gentle wind from the north (as suggested by relatively good quality air observed in Mongolia and poor quality air in Philippines and Japan) drove the air pollutants back and added them into the air space across northern China, making the real-time AQI extremely high there.

More visual examples can be found in my previous posts addressing seasonally persistent air pollution in Asia and Europe.

From a local perspective, the real-time AQI is a sensitive indicator of air quality at each particular place or in each particular city. Whenever the AQI is low, air quality is good and we feel happy. Whenever AQI is high, air quality is poor and we may feel sad and depressed. To measure the range of air pollution does not make any sense for the place or city. However, the real-time AQI is quite unstable and varying. From a regional and global perspective, the AQI alone is not enough. We should take both the AQI and the range of air pollution into account, so as to better understand the scale of air pollution.

Practically, it is not difficult to estimate the range of small-scale air pollution, since the World Air Quality Index project team is proving a transparent air-quality information every day for more than 70 countries, covering more than 9000 stations in 600 major cities. However, it seems always difficult to estimate the range of large-scale air pollution since air pollution has become a trans-boundary problem, especially in Asia and in winter. As shown on the visual map of air pollution, relevant data are always unavailable for some countries and in ocean areas.

It seems that some governments in Asia and Europe are using the average AQI as an outcome to evaluate the efficacy and effectiveness of relevant policies and interventions. For an example, a recent news report documents that some European countries may face legal action if they fail to make progress on reducing air pollution. For another example, it is reported that Beijing had met a national standard for mitigating air pollution in December 2017 and the average PM2.5 concentrations fell by 33% from 2013 to 2017 in 74 Chinese cities. However, another report released by The Economist indicates that prohibitions in northern China seem to have shifted some polluting activities elsewhere and that air pollution rose in southern China during past years. Given the limitations of the real-time AQI, the average AQI is not a reliable indicator for outcome assessment, since it is just one dimension for estimating the actual amount of air pollutant emissions (as mentioned above, another dimension is the range).

As all of us know, the most fundamental issue for mitigating air pollution is to reduce the amount of air pollutants emitted from fossil fuels. To reduce the amount of fossil fuels consumed and replace them with renewable energy is the most effective way. Thus, the average amount of fossil carbon emissions per square mile or kilometer is a valid and reliable indicator for evaluating the effectiveness of relevant measures or policies. It is not only applicable at a national level, but also applicable at a state or city level.

To date, there is little information about fossil carbon emissions per square mile or kilometer in different countries. It is hoped that the government in each country and relevant agencies could make the information in this aspect open and transparent, so as to facilitate the evaluation of the effectiveness of different anti-air-pollution policies and interventions.

(Note: There are five major air pollutants: PM2.5, SO2, NO2, CO and O3. Each one is measured as average per day and assigned an individual score. The final AQI is the highest of those 5 scores) 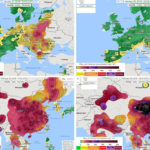