As shown on the map, air quality was persistently poor across Turkey during the last two months. Hazardous and unhealthy levels of air pollution were visible in most area of Turkey for most time of the cold winter season. Such persistent and toxic air pollution may be of high risk for health. A local study showed that exposure to air pollution was positively associated with increased respiratory hospital admissions in İstanbul, a major city of Turkey, during 2013-2015.

Turkey is a nation geographically straddling Eastern Europe and Western Asia, covering a total land area of around 770,000 square kilometers. According to the 2015 estimate, the total population of Turkey is more than 78 million, making it the 19th most populated country in the world. The European Environment Agency has reported that more than 97 percent of Turkey’s urban population is exposed to unsafe air pollution, and that air pollution is causing more than 40,000 premature deaths in Turkey every year. In 2016, the death toll caused by diseases in Turkey was 408,782.

During recent years, Turkey’s carbon emissions have risen substantially. The latest report by the Chamber of Environmental Engineers, a member chamber of the Union of Chambers of Turkish Engineers and Architects, has warned about rising levels of air pollution across Turkey.

Information available on the internet indicates that laws and regulations for protection of air quality are limited in Turkey. A major Turkish policy that includes elements against air pollution is the country’s 10th Development Plan (2014-2018). At the core of the plan is the development of Turkey’s renewable energy sector. Actually, the plan was backed and pushed by the Clean Technology Fund, a program designed to give middle-income countries the resources to innovate and develop clean technology. Turkey has set up an overall target of renewable energy supplying a minimum of 30 percent of overall energy produced by 2023. This measure alone may not be enough to lighten air pollution in the region.

A wikipedia article states that Turkey’s environmental laws and conservation efforts are eroding, not improving, and that Turkey’s nature-conservation-related legal framework is weakened, severely out of line with globally accepted principles. Currently, “regulations in Turkey do not contain any restrictions on the pollutant PM 2.5”. Therefore, more measures to mitigate air pollution in Turkey may be needed. 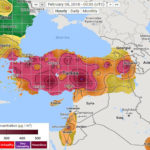